The frescoes by Niels Larsen Stevns (1864-1941) are housed in architect Jens Jacobsen's (1887-1968) beautiful yellow building in Brinck Seidelinsgade no. 10. The building was  built as county library for Hjørring Amt (county) in 1926-27, and during the years 1972 to 2003 it was the city's art museum. Today it belongs to the financial institution  Sparekassen Vendsyssel.

In what was originally the grown-up's reading room you find  Larsen Stevns' frescoes, painted directly on the wall in the  wet plaster. Larsen Stevns explains that “frescoes demand that you know what you want to do. Not one brush can be changed without chopping of a piece of the plastering.”

The frescoes were painted during the summer of 1936 by the  72 years ord Larsen Stevns and payed for by Ny Carlsbergfondet (The New Carlsberg Foundation). The  painting job itself took Larsen Stevns and the assistant four months. The commission was to paint motives with relation to Vendsyssel (the part of North Jutland north of the fiord Limfjorden). Larsen Stevns chose to paint historical  tales where the people from Vendsyssel played a deciding role in Danish history. The frescoes include two series of three painting each with motives from the history of Vendsyssel. The one is about the peasant leader Lars Dyrskjøt, the other about the naval officer Skipper (Master) Clement.

Larsen Stevns is prominent in the Danish art history, not least due to his bold and colouristic use of colours, where he in a quite exceptional way is able to put the elements in play. 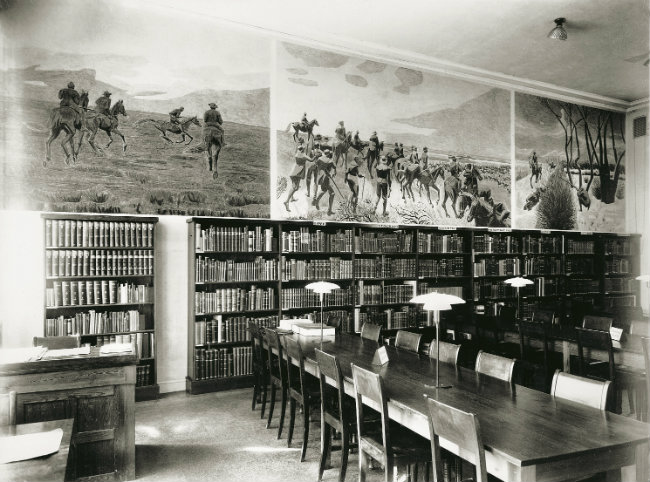 The three paintings in the Skipper (Master) Clement series portray the man as leader of the peasant uprising against the nobility and as one of the great figures in the history of Vendsyssel. Master Clement was naval officer under king Christian II. During the years 1525 to 1534 he operated as freebooter, making a living by seizing vessels. The narrative structure in the painting is not running in the  reading direction as in the Lars Dyrskjøt series but from the middle outwards. Master Clement is located in the centre from where he as a commander directs the scenery. The story unfolds from the painting in the middle.

“Slaget ved Svendstrup Mose, 16. oktober 1534”  (The Battle at Svendstrup Moor, 16 October 1534) tells the story of Master Clement advancing with 6,000 armed peasants during Grevens Fejde (The Feud of the Count). They marched along the moor and put the aristocratic army to flight. Not only were the peasants in the majority, they also had the most advantageous position. Master Clement is located centrally in the painting, directing the battle.

The three paintings in this series depicts how Lars Dyrskjøt and the people from Vendsyssel are fighting the Swedes. The story is taken from Lars Dyrskjøt's last day on Earth in 1644. The Swedish troops are at Aalborg, ready to cross the frozen fiord in order to take the rest of Jutland. However, the  people from Vendsyssel put together a peasant militia at  Nørresundby and fight the Swedish stoutly - lead by Lars Dyrskjøt at the age of 84. The scenes are described in  paintings with horsemen, the riders in the first painting indicating the reading direction. 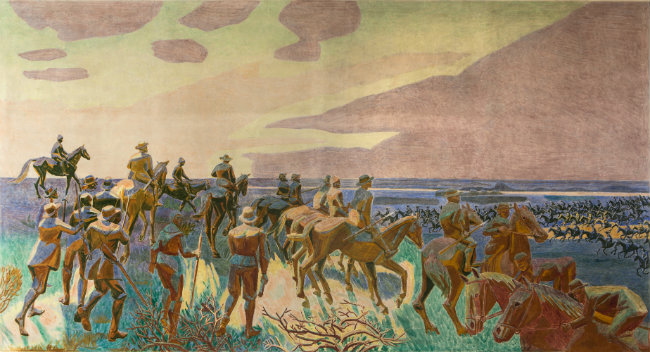